Yusuf Meherally Centre is advocating mainstreaming of rural development and making generation of non-farm employment in rural India a people’s movement. For this, it has promoted Khadi Gramodyog Andolan. The Andolan was launched on January 30, 2005 at Rajkot at a meeting of Gandhians, khadi lovers and activists. The Andolan has organized several exhibition-cum-sales and has set up a small committee to oversee its functioning. While the Centre is collecting information about the gramodyogs( village industries) in different states and what they produce and is cataloguing them and is mobilizing support from Indian Institute of Technology Mumbai etc. for improving the technologies and being used to setting up common facility centers at Tara and Nagapattinam, promotion of sales in Mumbai and other places:

The Centre has, among other things, a dairy at Tara and has an experimental organic farm. The latter is called ten guntha experiment. This is an important activity of ours. The late Prof. S.A.Dabholkar, a Mathematician turned Agricultural expert, claimed that a family of five can live above poverty line on ‘ten guntha’ (a quarter acre) if they follow certain agricultural practices. In this no tilling and digging are required and no fertilizers and pesticides are used. This is a low external input agriculture, utilizing the cow dung and urine from the dairy, and biomass, which go into a vermi compost. This, if accepted and popularized, can be a boon to marginal farmers. The Centre is trying to replicate this ‘experiment’ on twelve different farms and is also preparing a manual and conducting training classes off and on.

In Tara in Raigad District of Maharashtra, the Centre has two high schools, a Marathi medium and an Urdu medium. It has another Marathi medium high school at Shirkie, a village about 25 kms from Tara. A 35 bed hospital with two operation theaters, a dental unit, an X -ray unit and a pathology unit. Every Sunday, there is an eye operation camp, when about 15 patients are operated and implanted with Intra Ocular Lenses.
We have a project to upgrade this hospital as general hospital. Besides, we have acquired land to establish a hospital in Anjanvel village, Guhakar Taluka, Ratnagiri District, Maharashtra.. There is a village industries complex consisting of a soap unit producing both toilet and laundry soap, an oil ghani unit, a bakery unit, a pottery unit and a carpentry unit. A Non Formal Vocational Centre attached with hostel facilities, for tribal youths, who are drop outs from schools, giving six months training in various skills like, welding, electrical wiring, home appliance repairs and two wheelers repairs. The training is free, including boarding and lodging:
On July 2, 2009, Yusuf Meherally Centre opened a hostel for Adivasi, Dalit and Below Poverty Level girls at Tara, a village on the Mumbai-Goa highway. The building for the hostel has been constructed with the grant given to it by the Government of Maharashtra. The hostel has a capacity to admit 50 girls. On July 2, 2009, there were 20 girls, but now there are 30. In due course, the number will increase to 50. The hostel is in the compound of the Bhanuben Pravin Shah High School, Tara.:

The hostel needs a lot of furniture and equipment and there is a need to fence off the area. There are plans to use solar gadgets of all types. In fact, the idea is also to showcase solar gadgets like solar lamps, community solar cooker, solar heater, solar drier etc. And the hostel needs more storage space for water, roof water harvesting, a standby bio-diesel generator set, sports and art material, library books etc

The Centre constructed 322 permanent houses and handed them over to the victims of the earthquake. Promoted income generating activities by imparting special skills to about 550 women in ethnic embroidery, among other things. Conducts non-formal education for the children of fishermen and salt pan workers there, who are always on the move in search of work, covering about 2000 children. And provides free hostels, food and accommodation 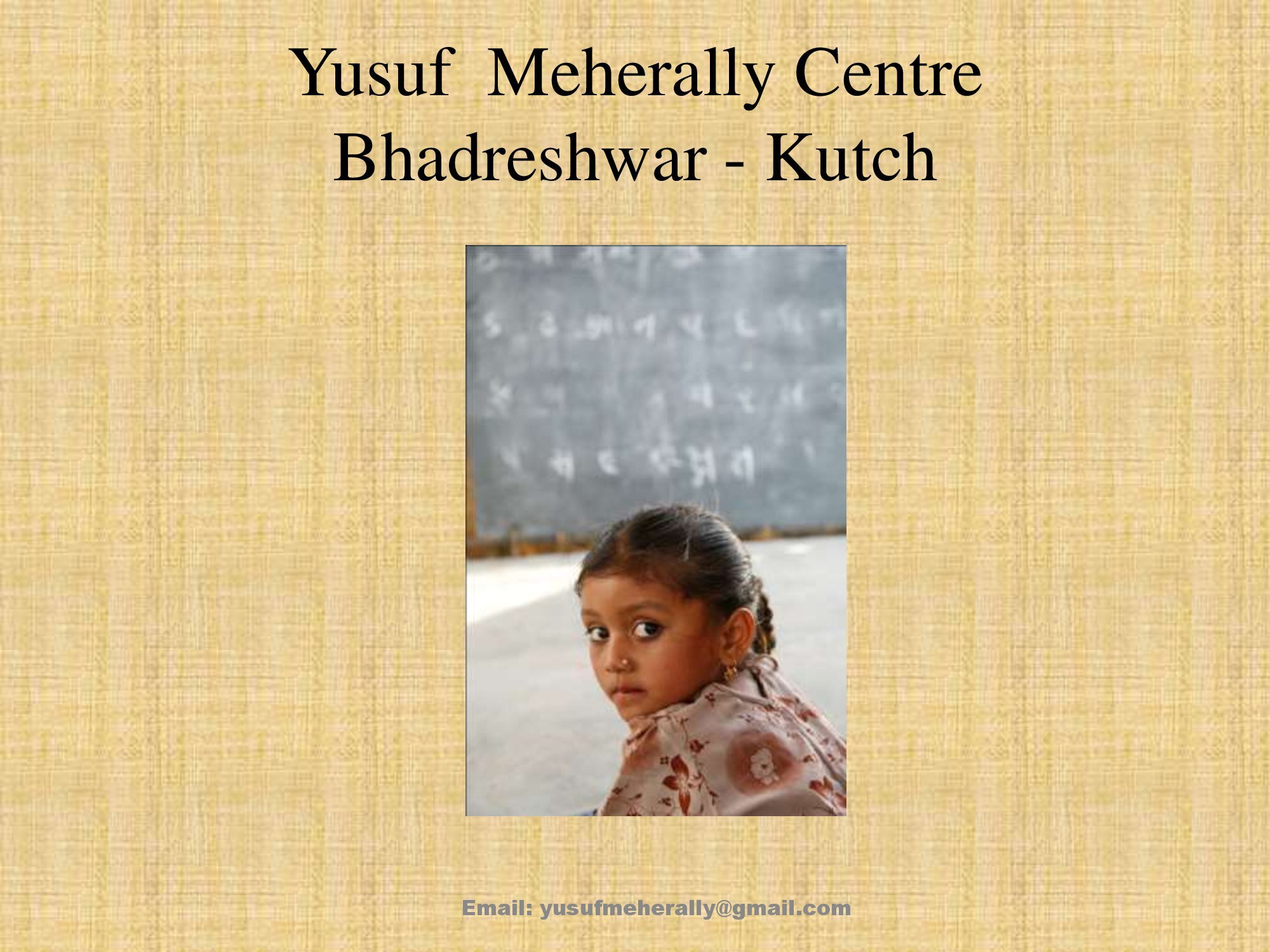 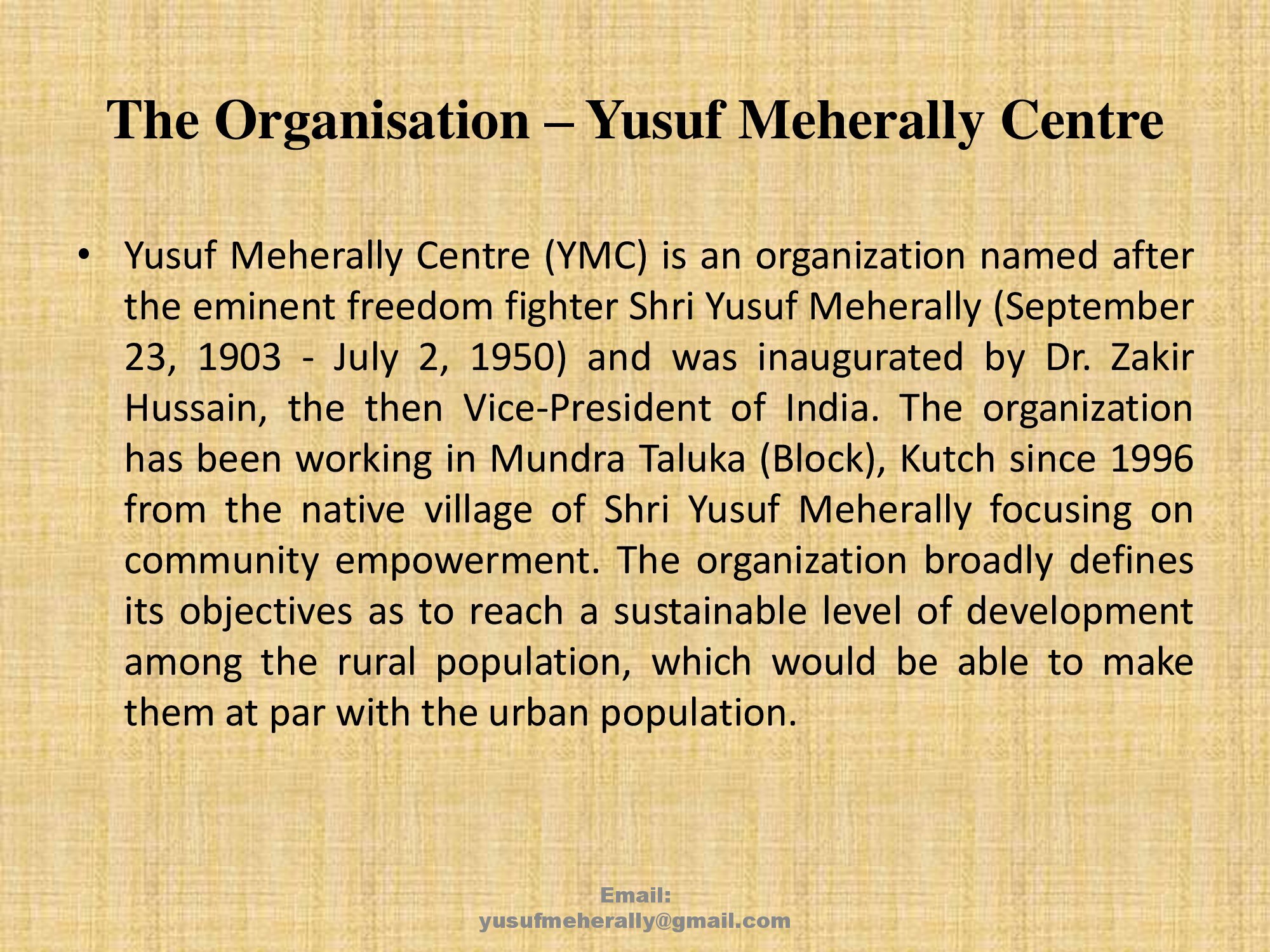 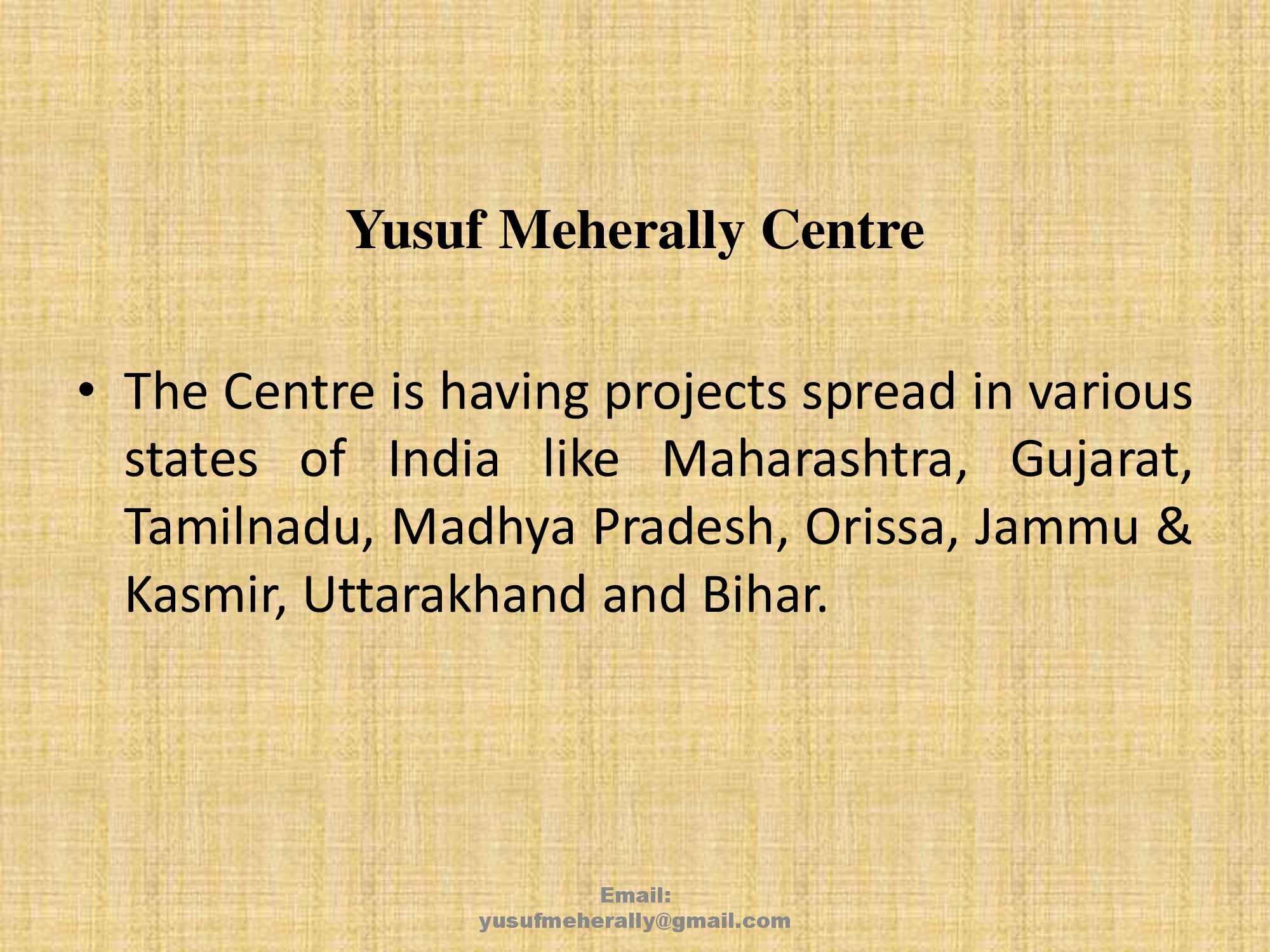 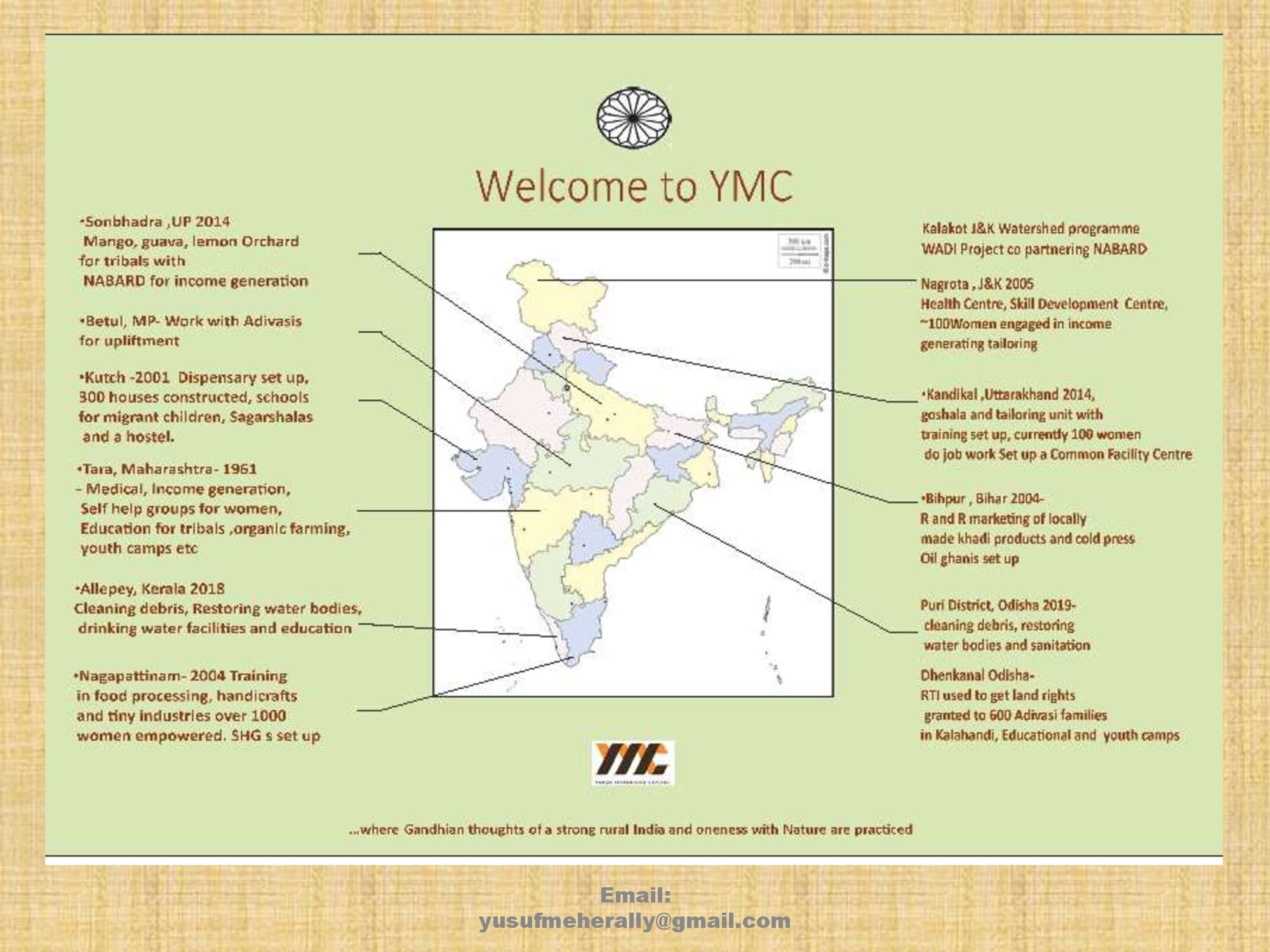 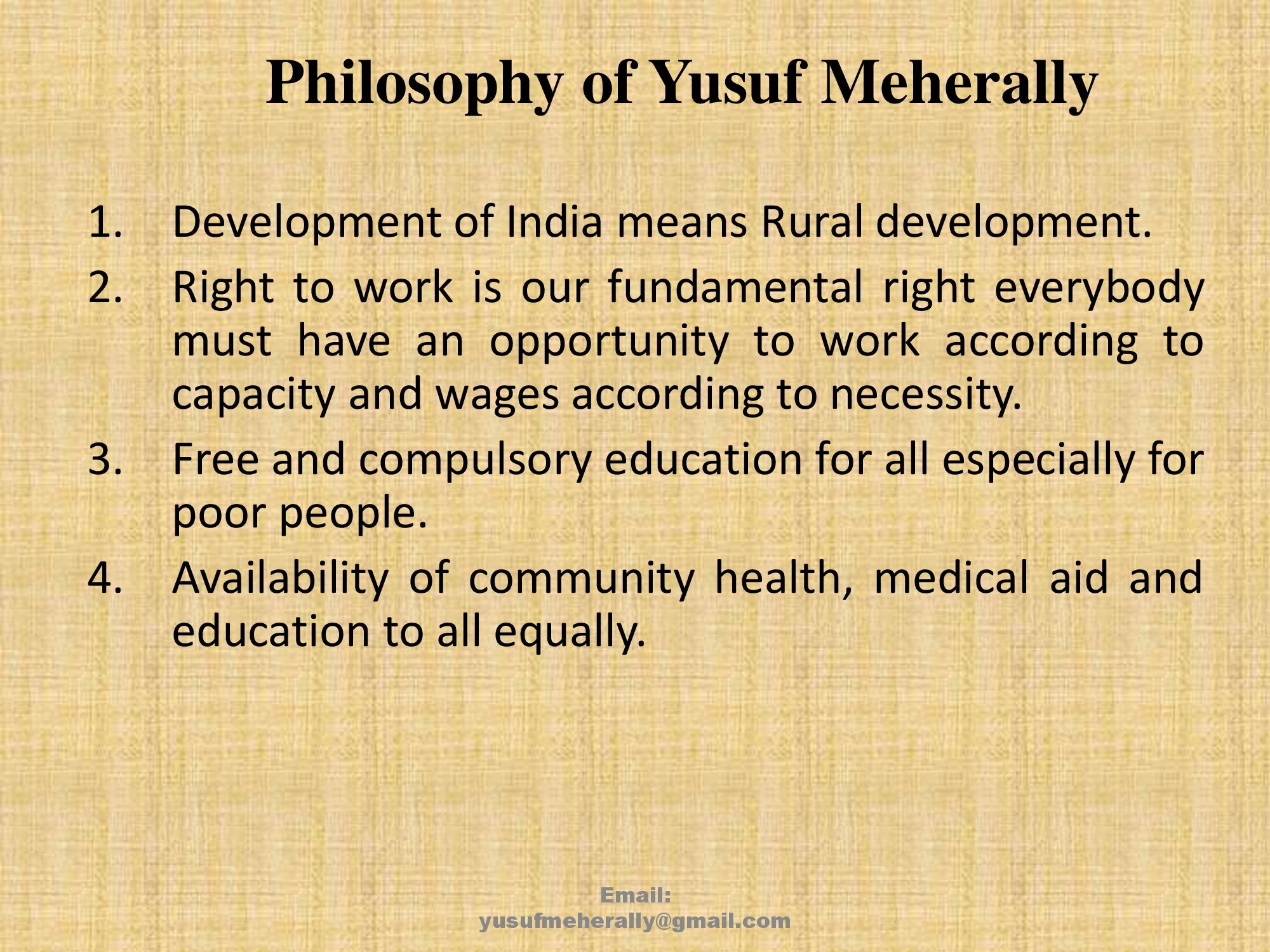 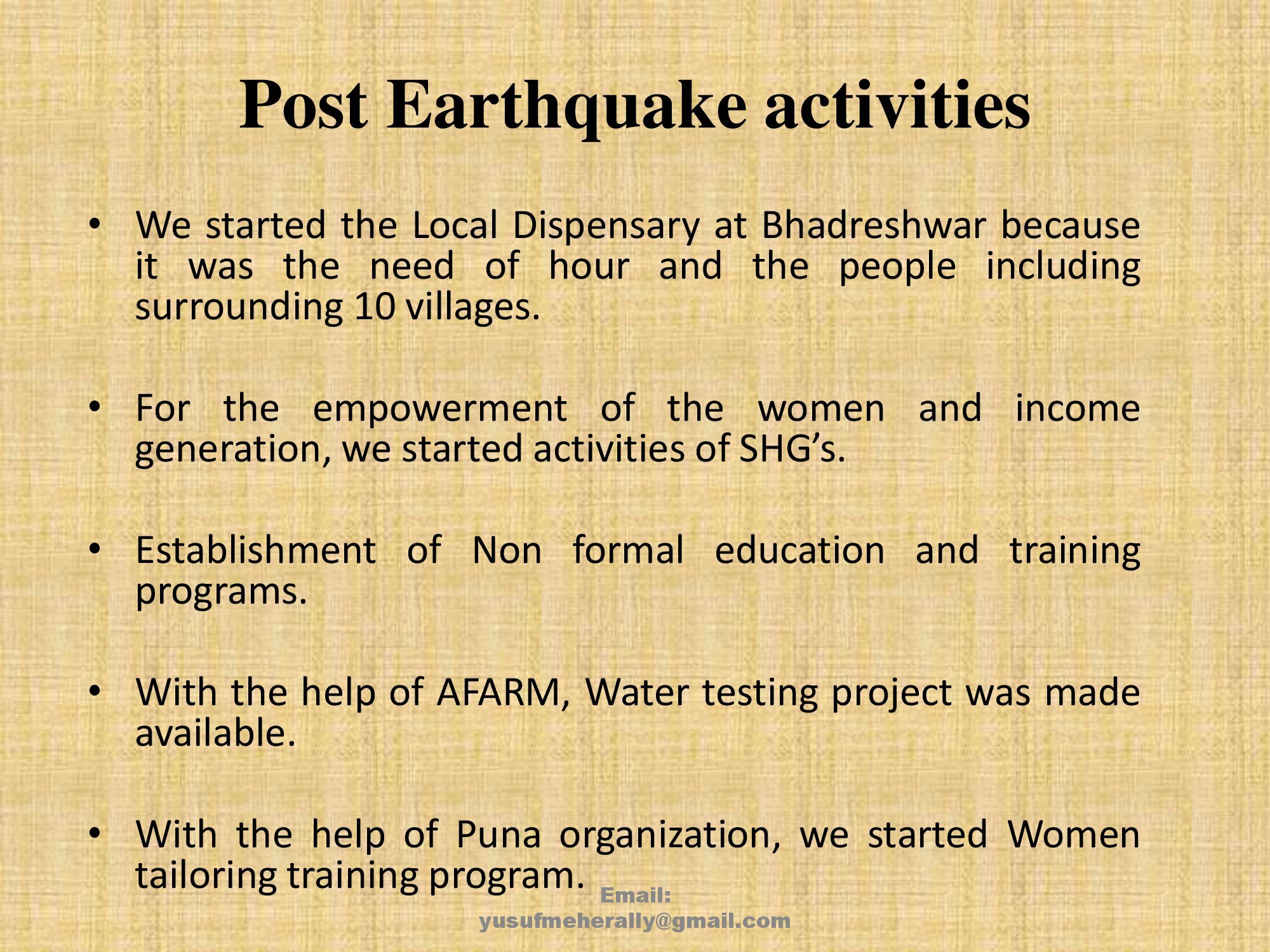 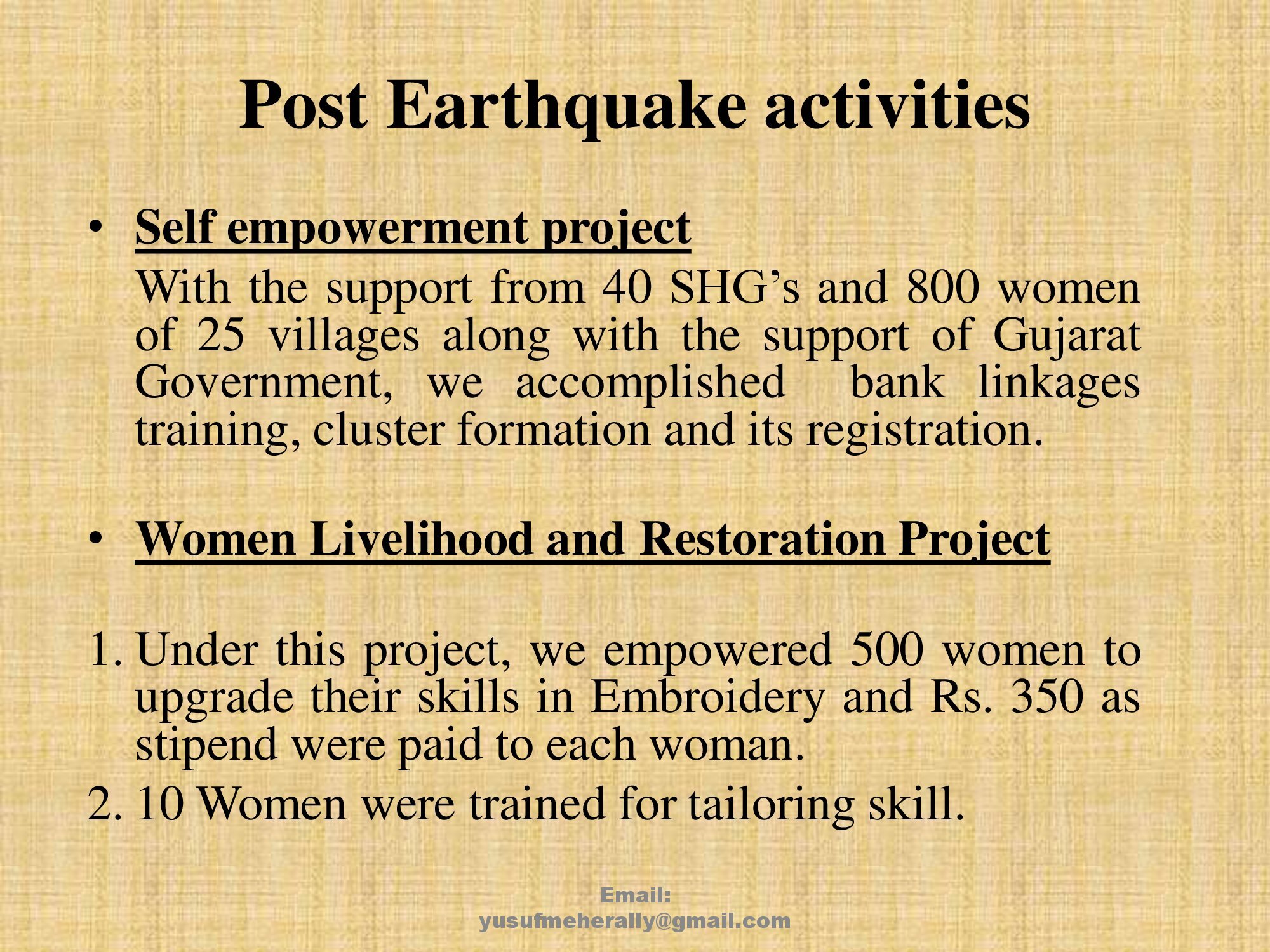 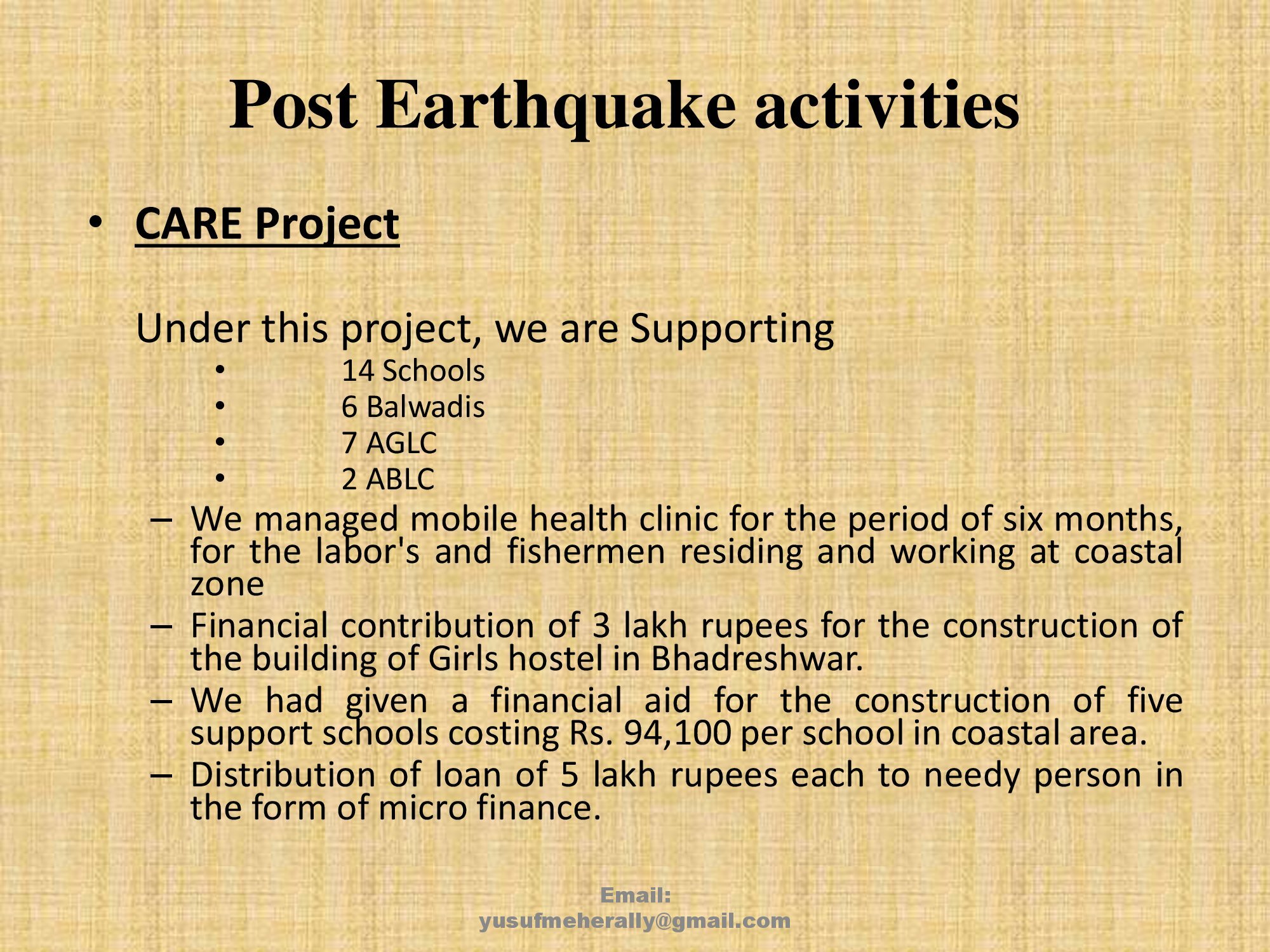 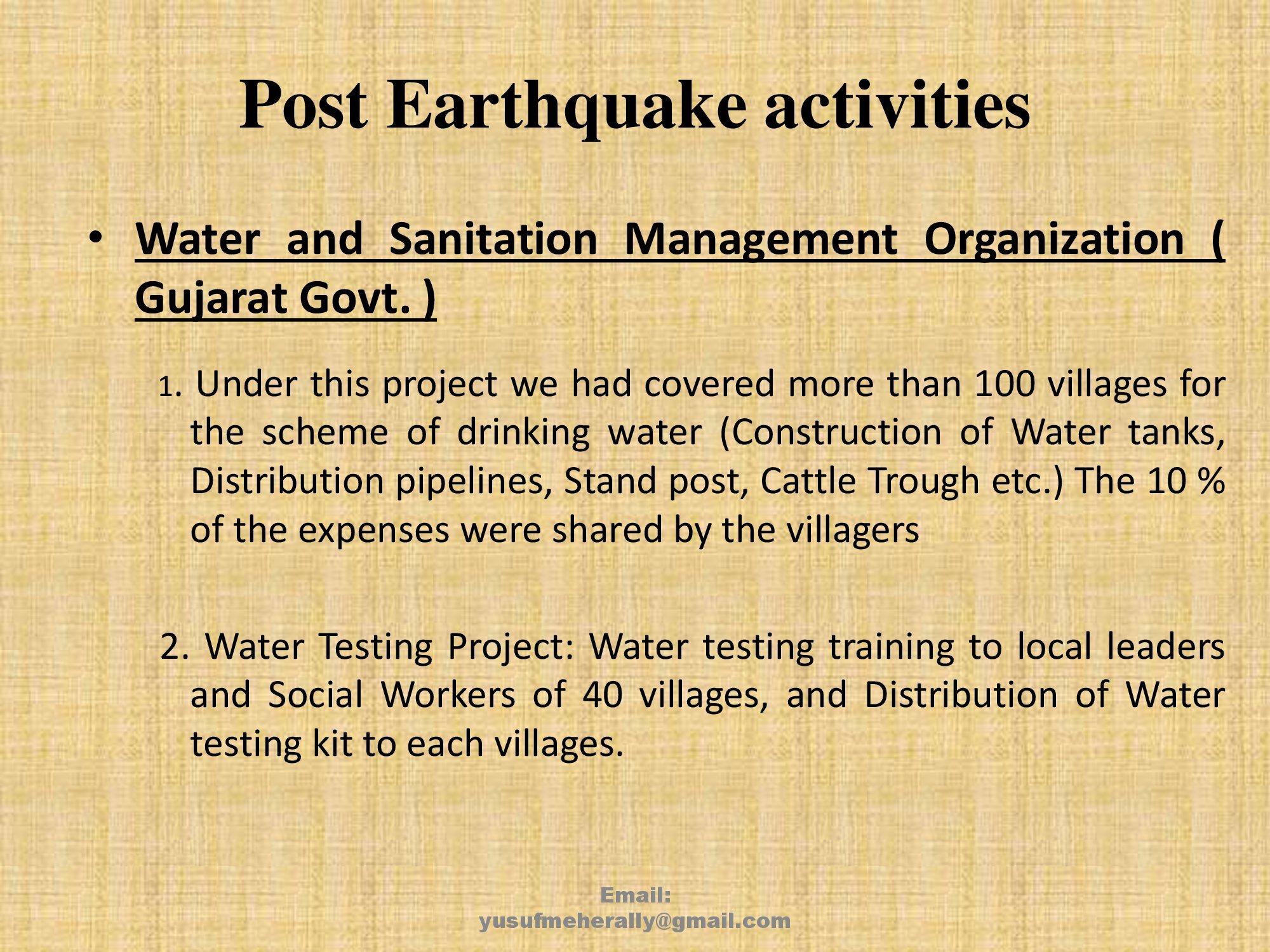 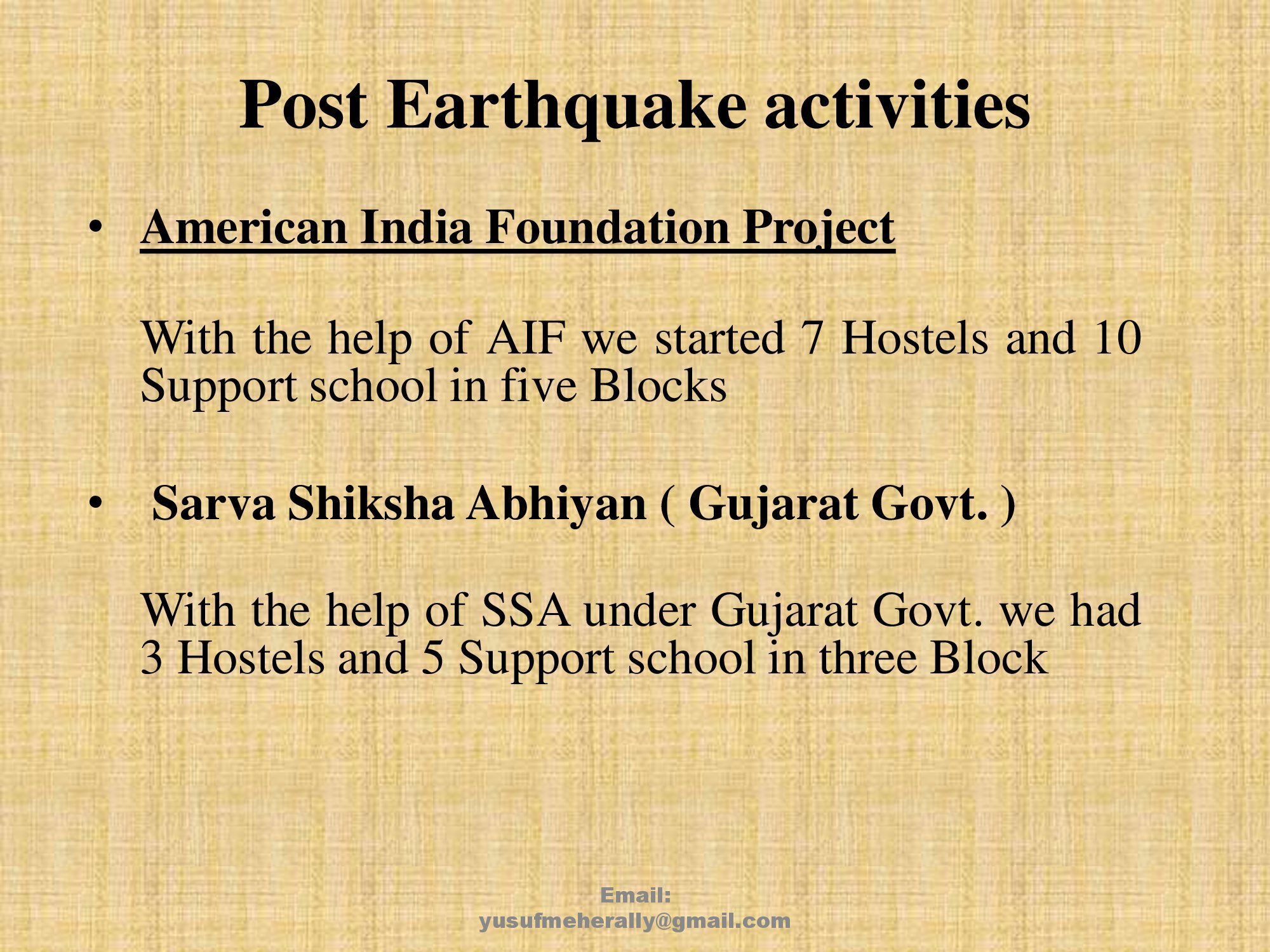 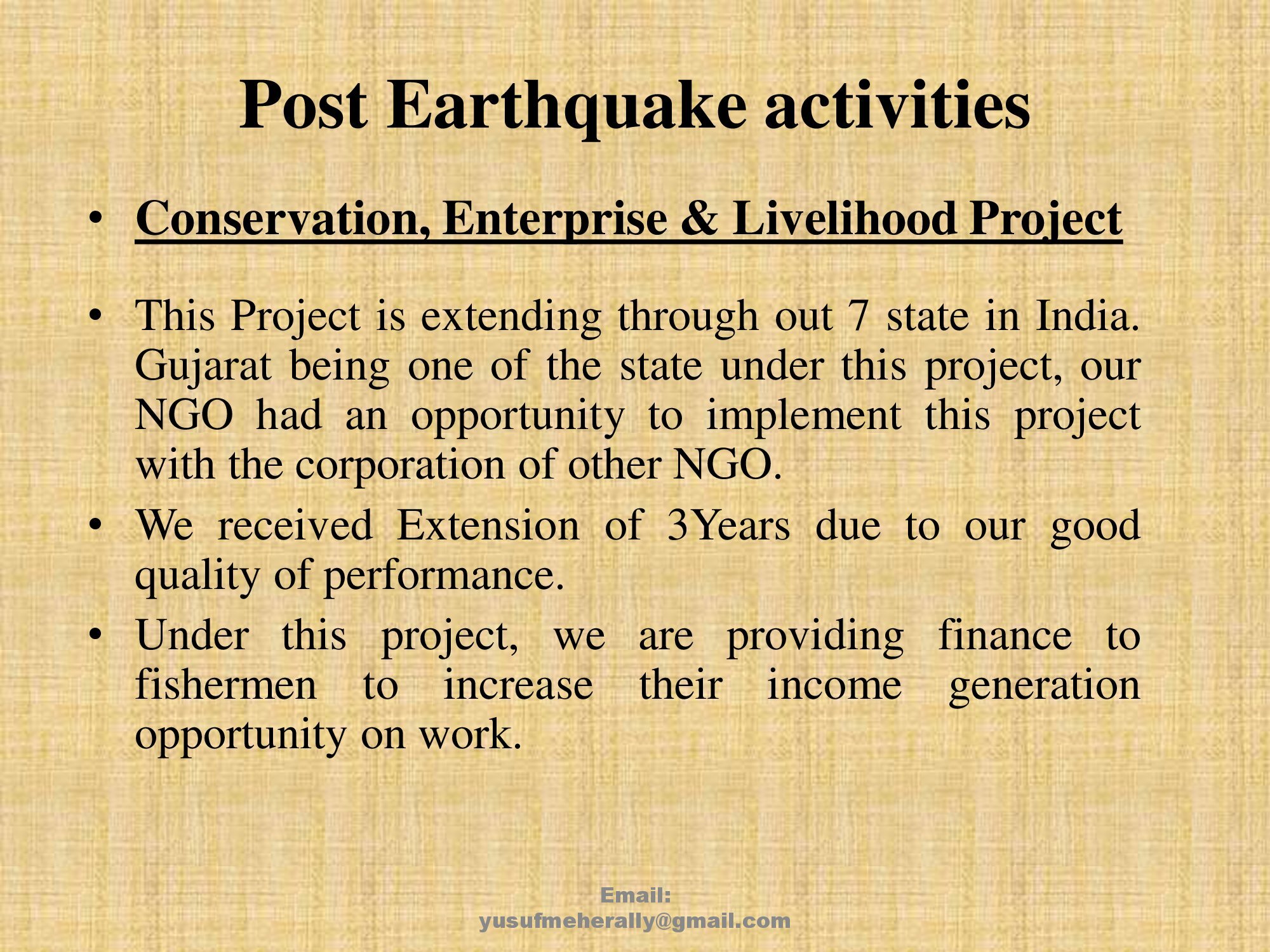 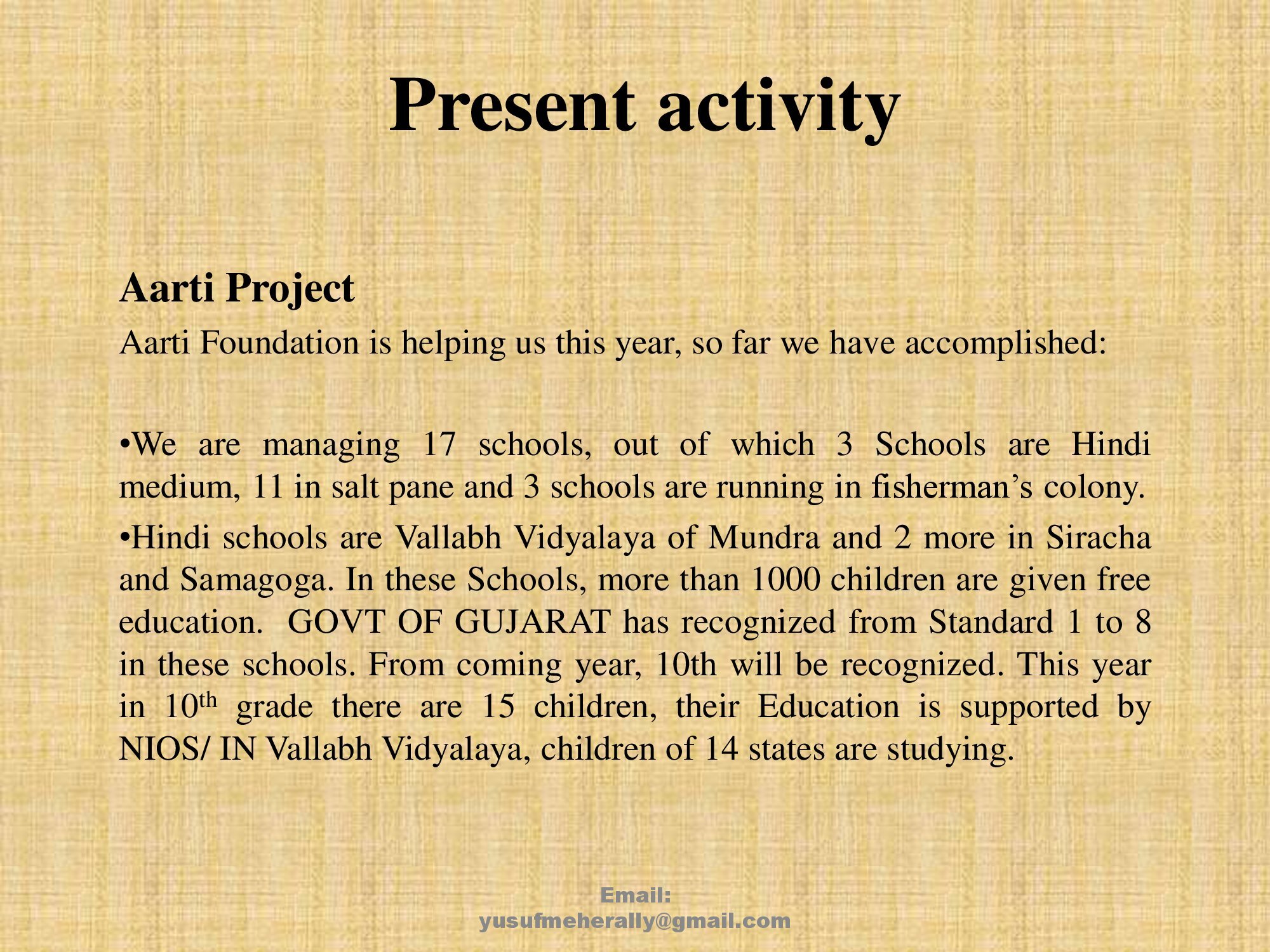 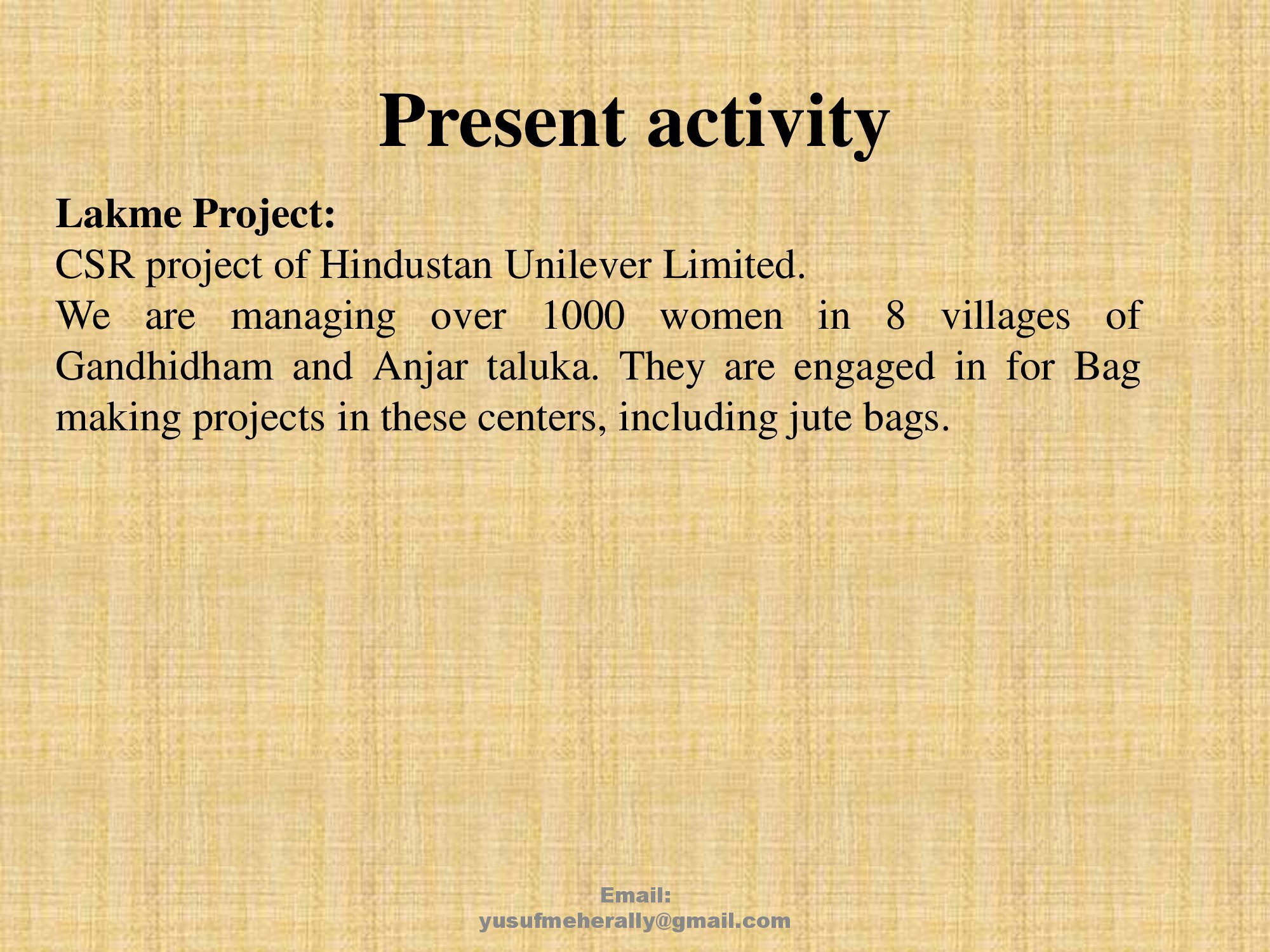 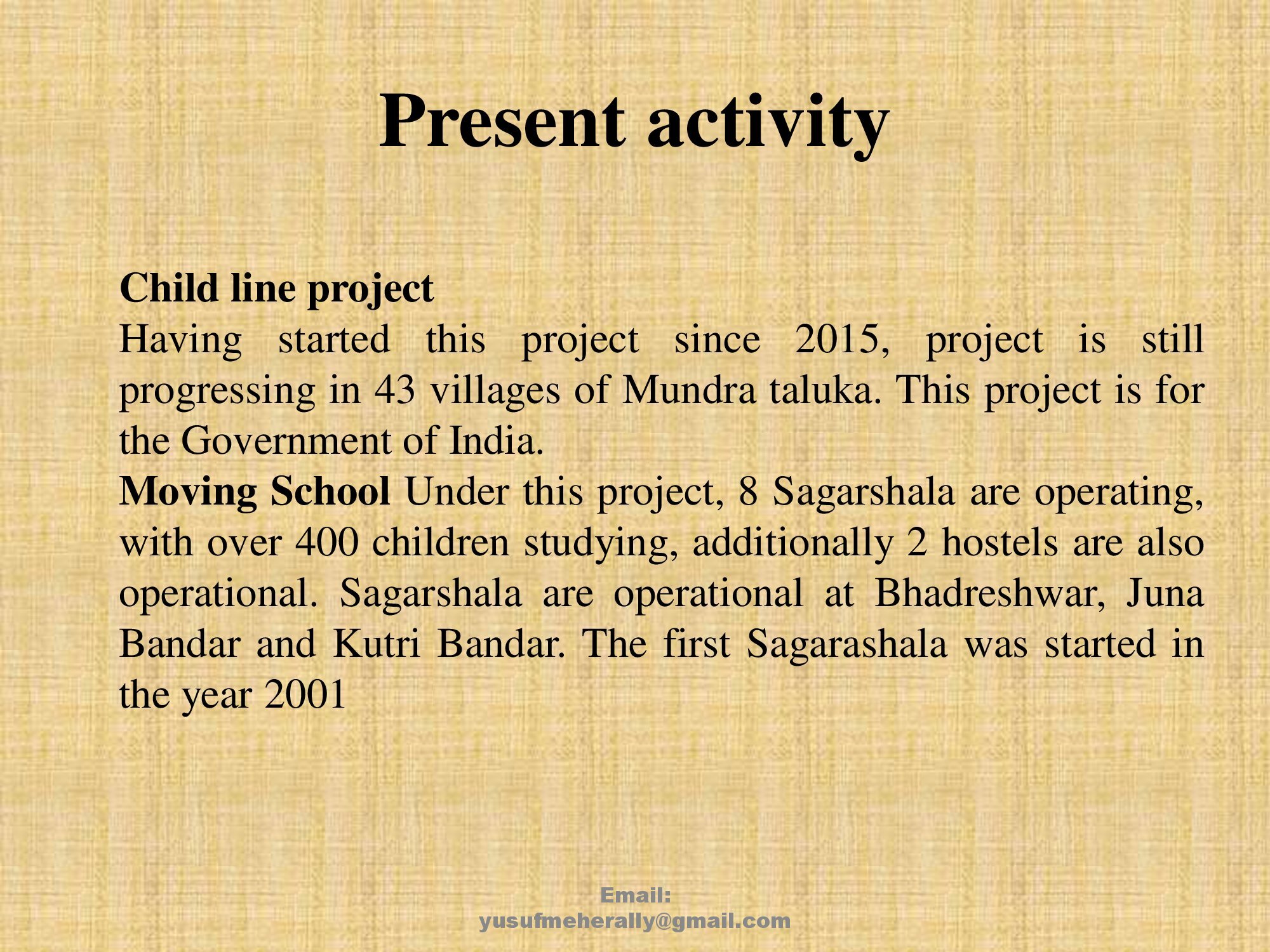 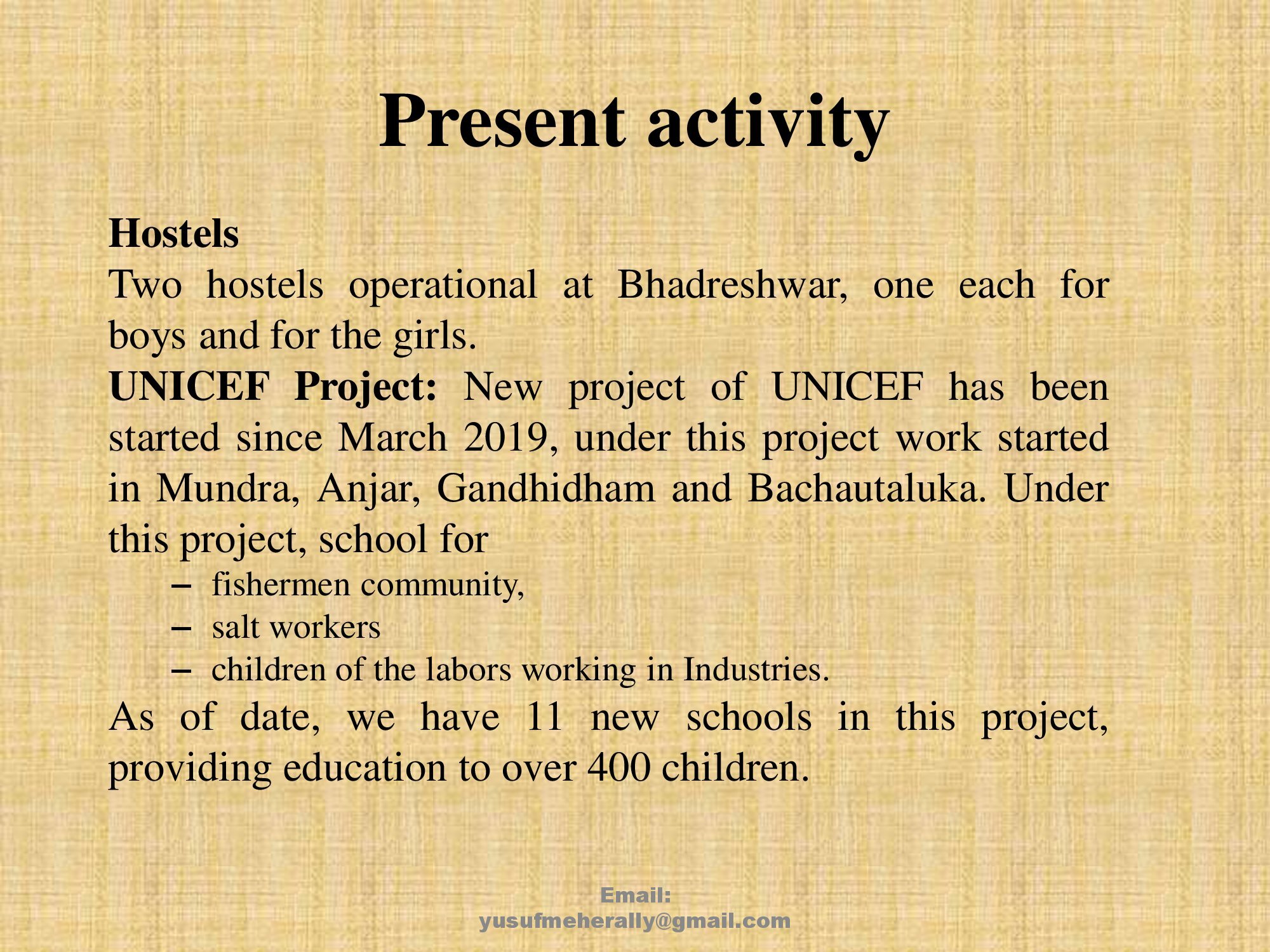 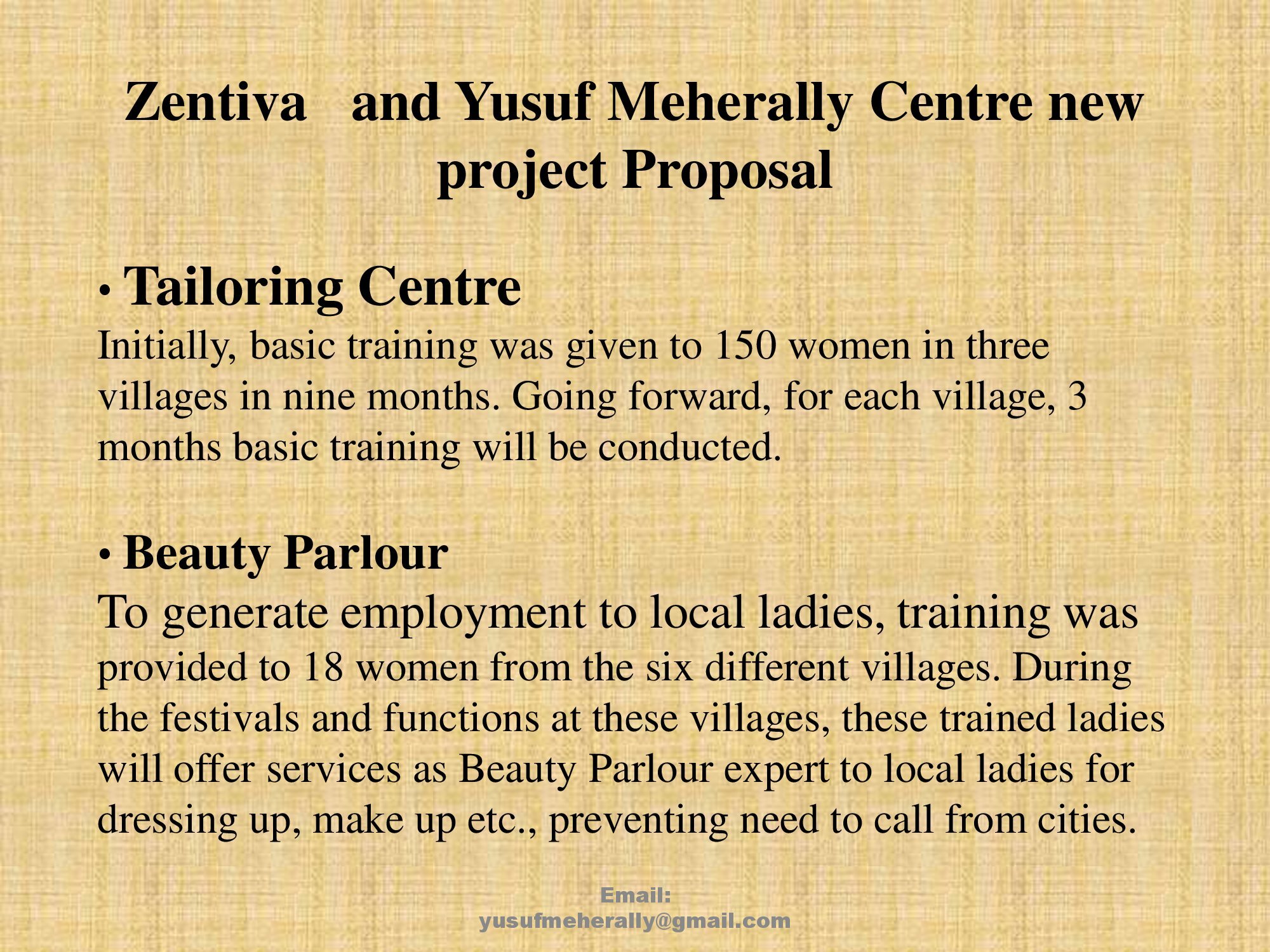 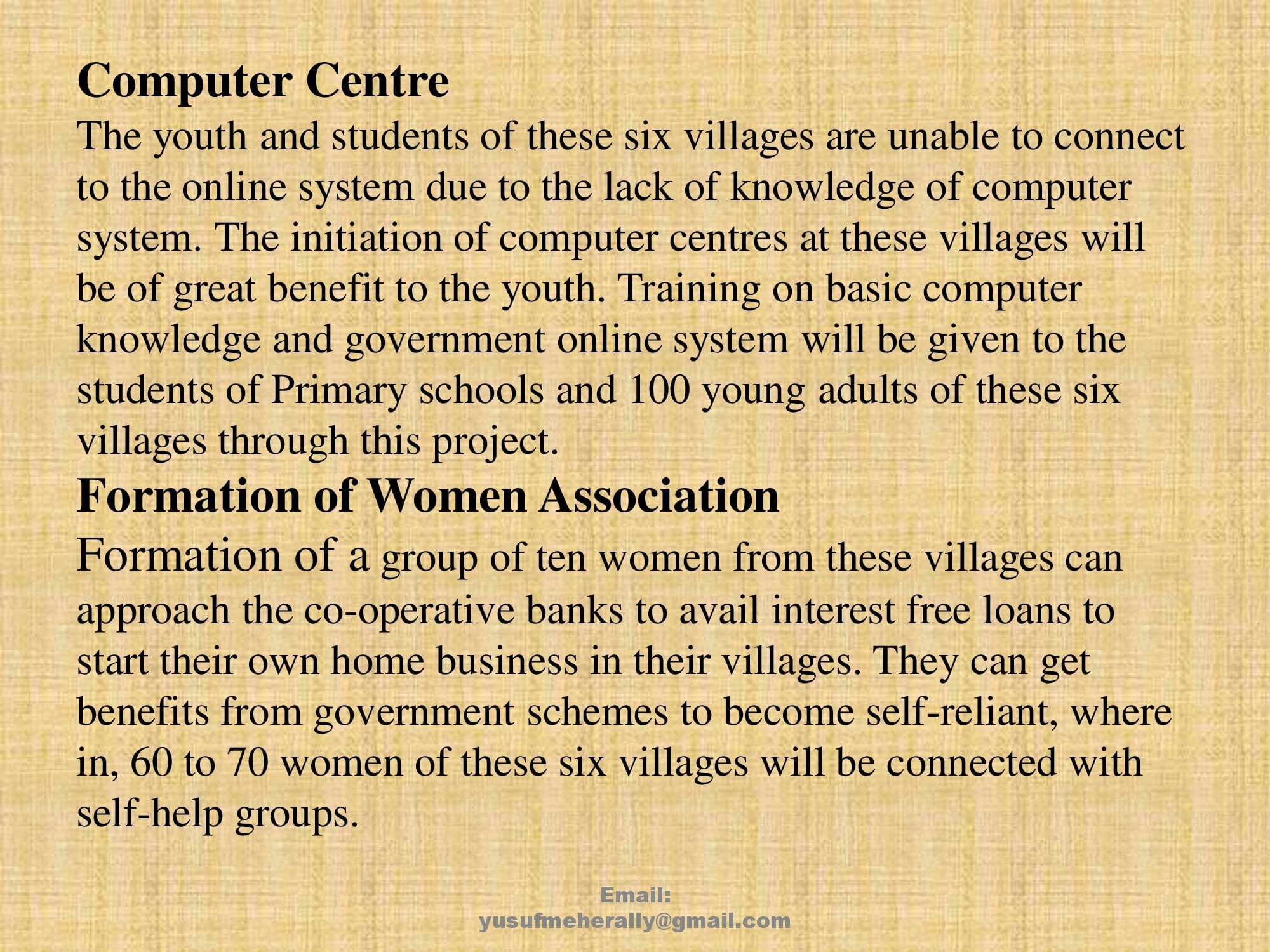 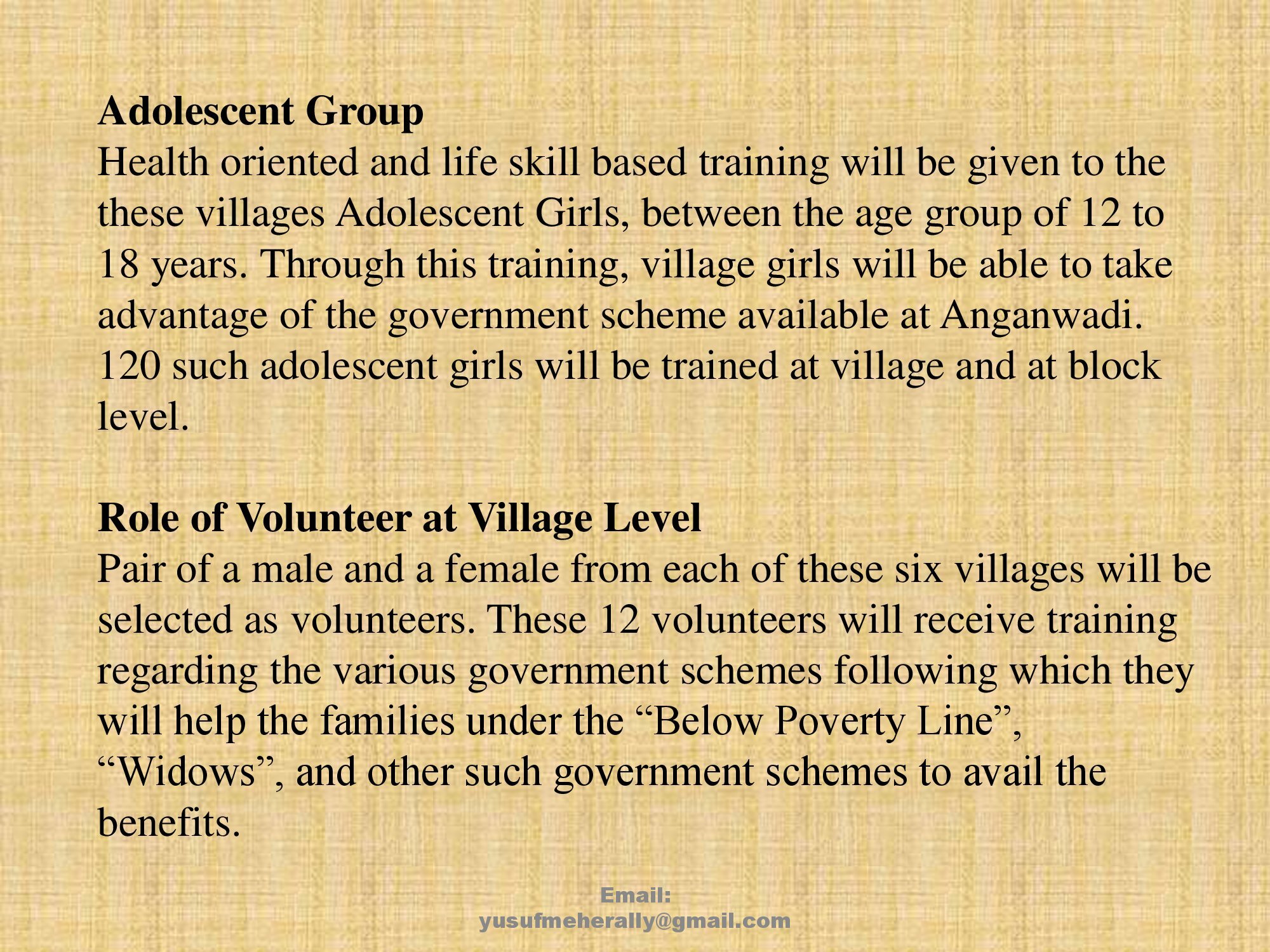 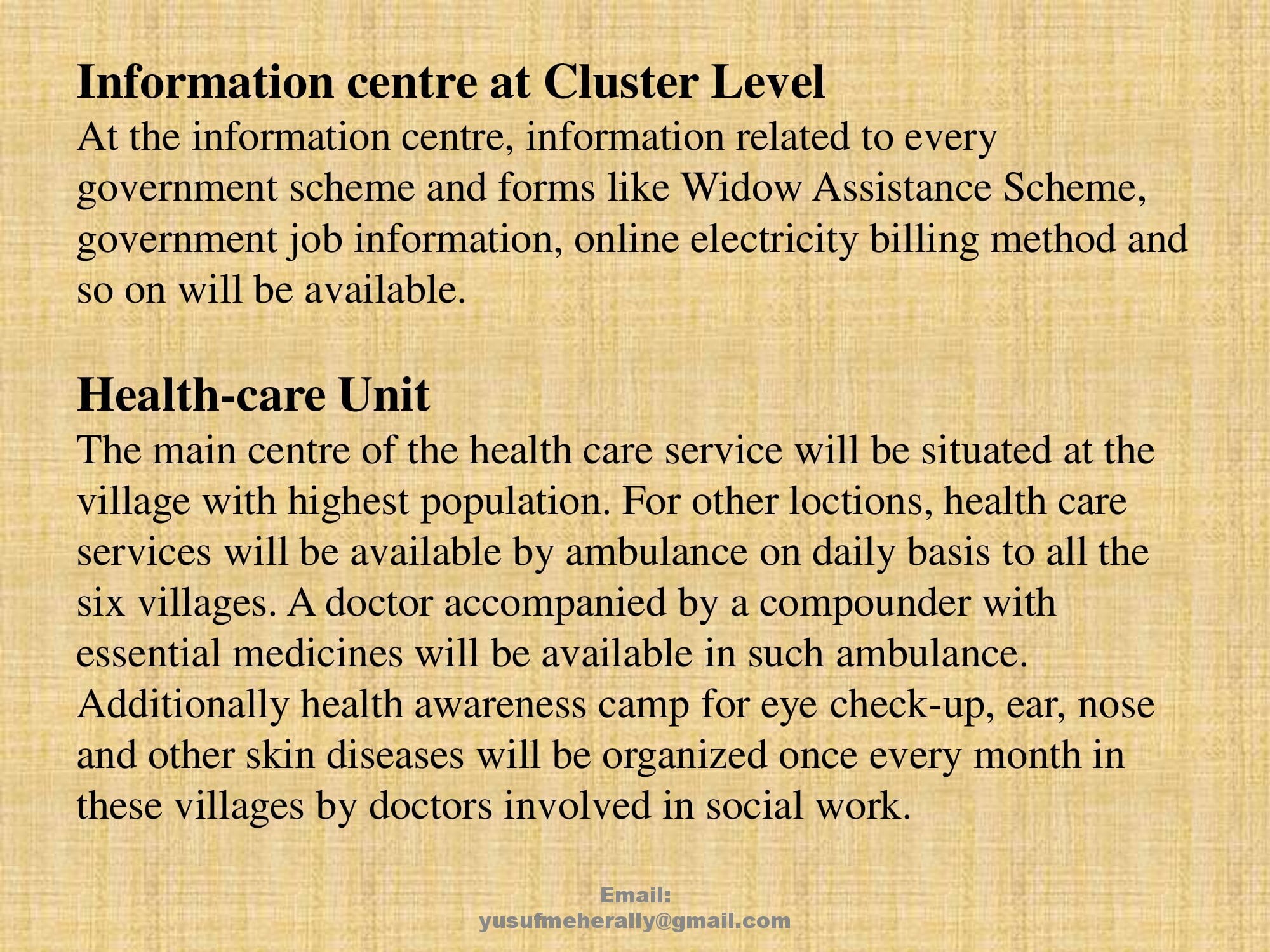 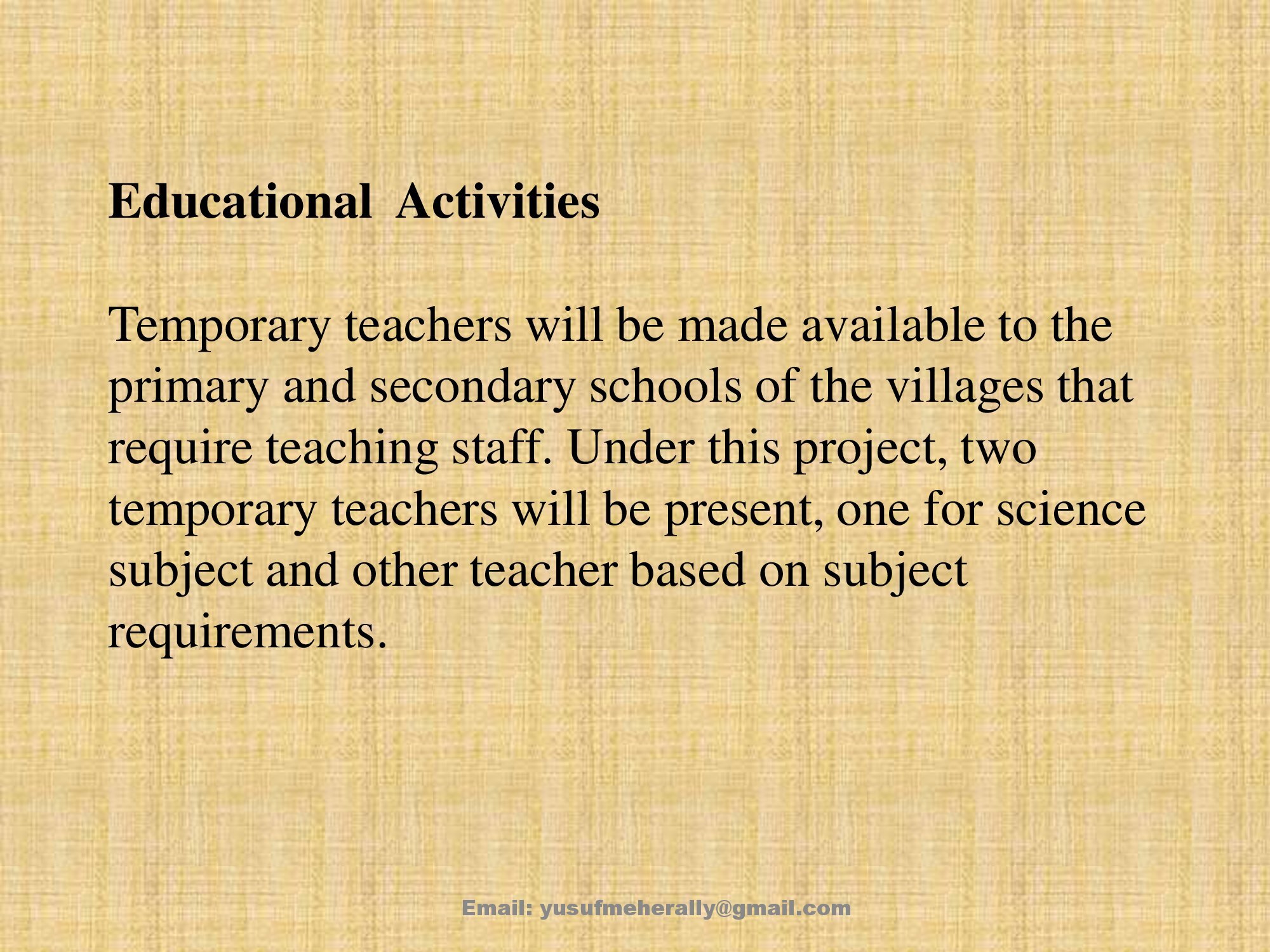 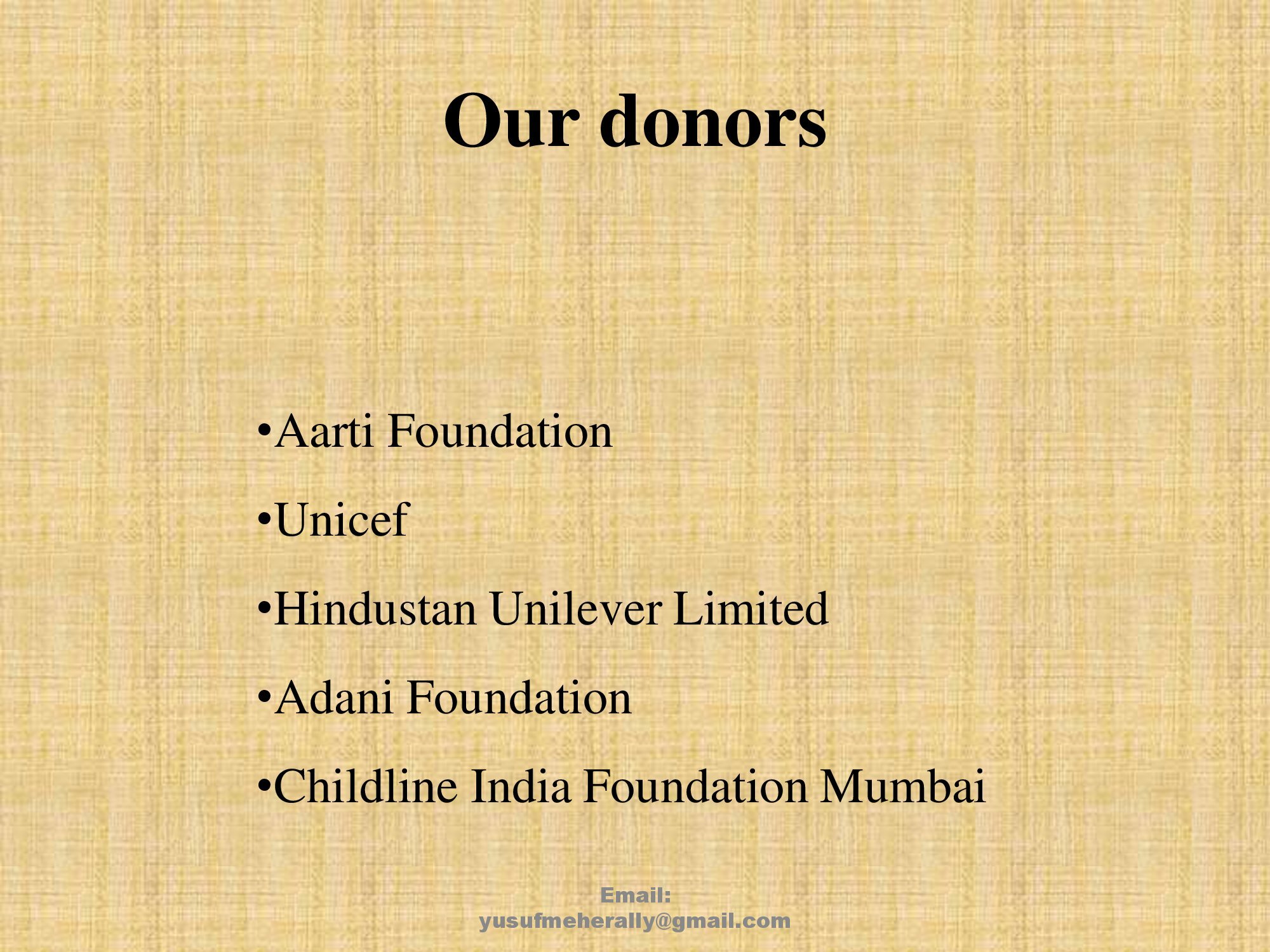 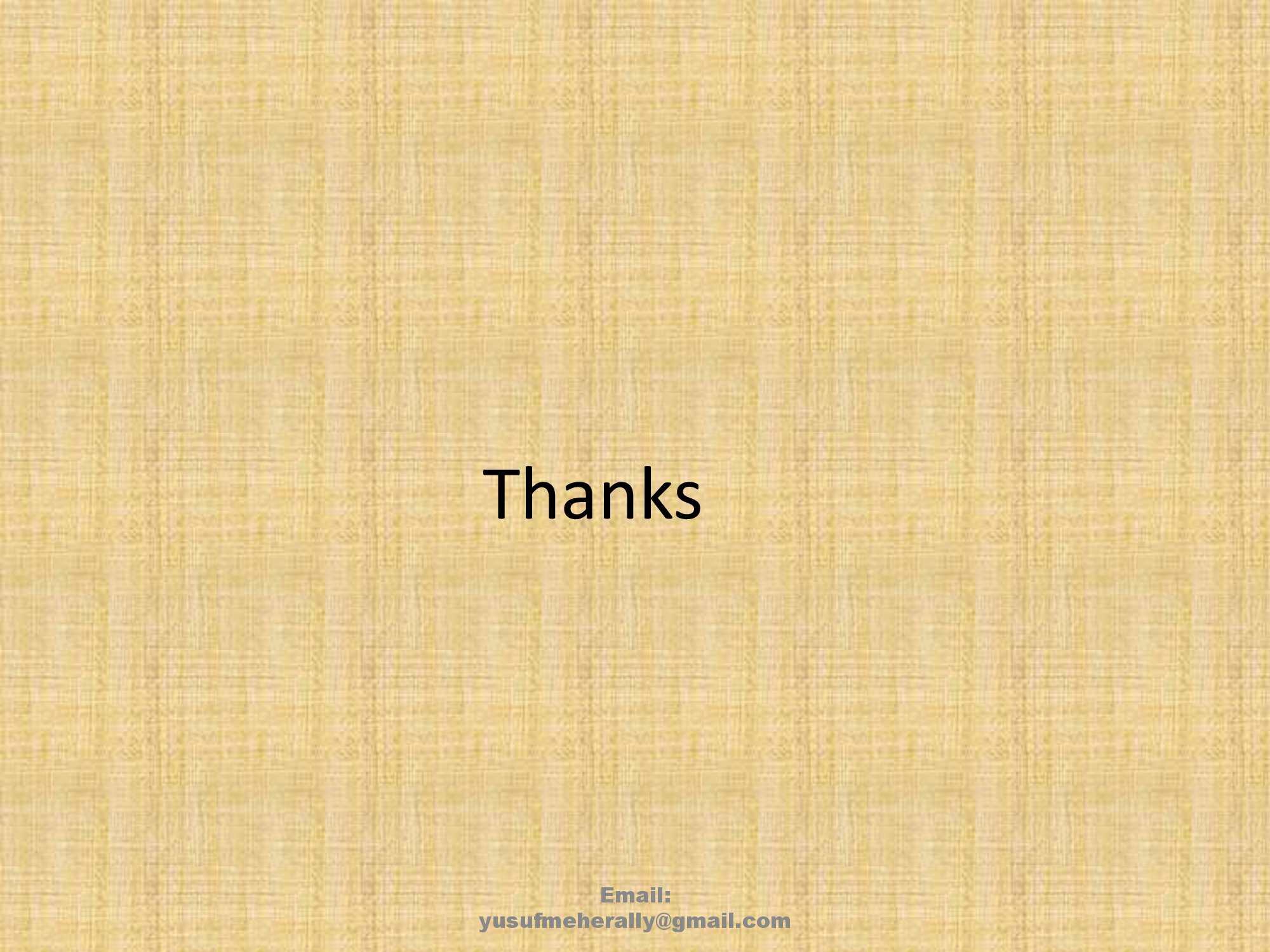 “Let me finish 10th grade, and then we can talk about next steps,” says Yasmin, a 14-year-old daughter of migrant uisherfolk, cognizant of the hurdles she overcame in order to attend a government-run school in Bhadreshwar, Gujarat. Already engaged to be married, Yasmin is thankful to be among the first girls in this predominantly Muslim community to enter 10th grade. For eight months every year, Yasmin travelled to Mundra, a fishing town, where she attended a site school supported by Yusuf Meherally Center (YMC), an AIF LAMP partner. However, the school did not have a class for 10th graders. When YMC teachers encouraged Yasmin’s family to allow her to attend a government-run school near her home village, her parents refused at first. What is more, the school had deleted her name from its roster so Yasmin could not take the state entrance exams for10th grade. Luckily for Yasmin, however, YMC had advocated with the state government to implement a policy that allows migrant children to re-enroll in the government schools in their home villages upon returning from migration. Yasmin is among the first to benefit from the new policy. She took her exams in a government school in Bhadreshwar, passed, and is now enrolled as a 10th grader. Instead of returning to the sea with her family, Yasmin and her ten former site school classmates will stay in a YMC hostel nearby and commute to a government school while their parents migrate. Yasmin’s parents were so overwhelmed by the persistence of the YMC teachers to educate their daughter, that they agreed to allow her to finish her studies. Imran, YMC’s Project Coordinator, says, “Yasmin will go further still in life. We continue to help her parents understand that girl students like her are rare and it would be a mistake if she had to quit now.”

YMC’s initiatives are focused on alternate sustainable livelihood for the victims of tsunami. It organized women of Self Help Groups and trained them in various skills to engage in productive work using locally available agro products. Already trained 900 women, in manufacturing palm leaf articles, rope making from coconut fiber, doormats etc., edible oil extraction, preparation of pickles and condiments from locally available fruits and vegetables, preparation of fruit juices and jellies from the locally available fruits, manufacture of detergents, oil soaps phenyl, liquid soaps agarbathi and dhoops etc., and more are sought to be trained:

The primary livelihood activity was setting up of a “pay and use model” common facility centre to process and add value to locally available raw-materials by subscribed members (women SHGs). Market linkages have also emerged as a support activity. Through the combined services of skills training and Common Facility Centre, about 200 women have got regular employment opportunity, with an average wage of Rs.50 per day, which may in due course get enhanced to Rs.70.

In Betul the Centre is working for adivasi welfare, particularly, health, on a modest scale. The Centre has purchased a plot of land admeasuring two acres. It has constructed a small office there. It is planned to set up there an organic farm which would be a replication of our Ten Guntha Prayog, an oil ghani unit to crush Mahua seeds and a soap unit.

In the aftermath of the floods of August 2008, the Yusuf Meherally Centre has made a presence in the areas affected by the Kosi river floods and opened an office at Bihapur on the border of Madhepura District. We propose to concentrate on health care, education and livelihoods. Our past experience in relief and rehabilitation work in Kutch and Jammu & Kashmir after the earthquake and after the tsunami in Nagapattinam, it is hoped, would immensely help.

Engaged in the rehabilitation of the victims of earthquake through training in income generation and related production activities.

In Orissa the focus is on the benefits accrued under the Right To Information Act and have an excellent group of workers. The local branch of the Centre in Bhubaneshwar is active in 40 districts of the Orissa State under the RTI awareness programme. Thanks to what we did, about 600 Adivasis (tribal) got homestead lands in Kalahandi. The Centre is also involved in education, organizing youth camps, eye-camps, etc. A well wisher has given a generous donation to the Centre to buy a plot of land in Orissa for its activities. It is proposed to buy a plot in Dhenkanal, which is about 80 kms from Bhubaneshwar and to set up there an organic farm which would be a replication of our Ten Guntha Prayog, and there will be a training center.

SearchPostsLoginCart
By using a homepage Building Builder
Raising Hospitality Revenue Through Buyer Experiences
Alliance Between Application Development and Computer Technology
Ant-virus For Business: Critical Features Which might be Critical to the Security of the Computer
Antivirus Programs Just for Windows — How To Preserve Your Computer From Malware
What Is Malware? How one can Protect My Computer Via It?